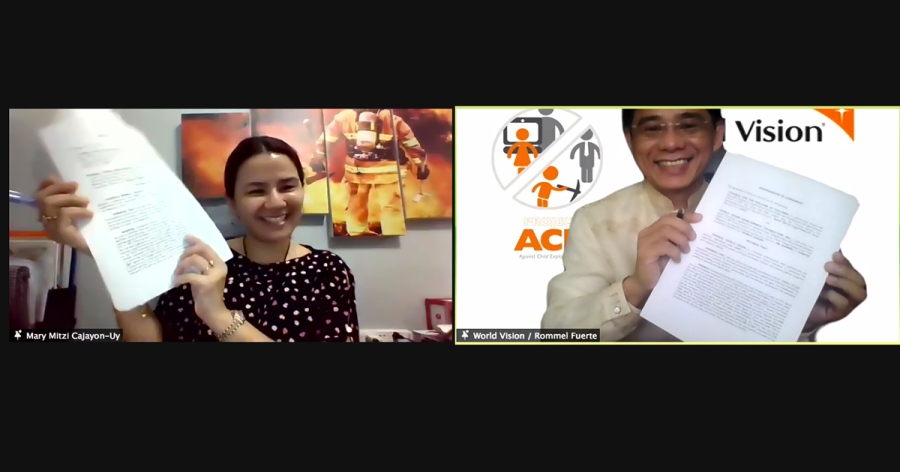 International child-focused organization World Vision and the Council for the Welfare of Children (CWC) recently signed, in a virtual ceremony, the Memorandum of Agreement (MOA) to closely work together for the Project Against Child Exploitation (Project ACE), funded by the United States Department of Labor (US-DOL).

The signing event was graced online by various stakeholders from the national and local government as well as distinguished guests from the US Embassy Manila and other like-minded agencies, to support the collaboration and commitment between World Vision and CWC in jointly addressing the worst forms of child labor (WFCL) including online sexual exploitation of children (OSEC), and violations of acceptable conditions of work.

Rommel Fuerte, National Director of World Vision in his opening remarks shared that “World Vision always makes sure that our efforts, our initiatives contribute to the plans and directions of the Philippine Government in ensuring that children, our children are able to enjoy the rights to survival to development to protection and to participation. And so it’s always a joy for us to be collaborating with government agencies and this partnership now with the Council for the Welfare of Children is a big step to working together to help in building capacities of local governments where Project ACE operates to ensure improved protection of children as it has been our mission to keep children safe and protected as far back as our 63 years history in the Philippines.

Project ACE Director Ms. Daphne Culanag expressed her gratitude to the CWC for this 1st MOA Signed for the Project saying “ We are grateful that we have signed this MOA with the CWC as it is the lead agency in government that undertakes a coordinating role for children through formulation and advocacy for the implementation of policies, programs and measures; monitoring and evaluation of policies, programs and measures; advocacy for the rights and mobilization of resources; building strong networks partnerships and coordination mechanisms; and institution building of partners and stakeholders. We are hopeful that Project ACE can greatly contribute to this mission through the project’s outcomes and outputs.

Project Against Child Exploitation (Project ACE) was launched on 14 September 2020, to support capacity building efforts of the governments of the Philippines and at least one other country in Asia to address Worst Forms of Child Labor including the Online Sexual Exploitation of Children. Funding is provided by the United States Department of Labor under cooperative agreement number IL-34007-19-75K. 100% of the total costs of the project or program is financed with federal funds, for a total of $1,500,000. Project ACE aims to impact child labor programs spread over Luzon, Visayas and Mindanao with particular emphasis in two key areas – Quezon City and Cagayan De Oro.

“Finally, the country’s long-existing problem with Online Sexual Exploitation of Children has been brought to the attention of everyone by no less than the administration. And although we were disheartened in the past, seeing how the already vulnerable situation of the children victims are aggravated due to the consequences of the pandemic, we are optimistic for now we have the support of the World Vision along with that of the administration as we push for an intensified campaign against OSEC among other worst forms of child labour. The CWC stands firm in its mandate to oversee the formulation of laws and policies to ensure that the rights of the children are upheld at all times.” Executive Director Cajayon-Uy expressed optimism as she reiterated CWC’s commitment to upholding the MOA.

The US Embassy in Manila Chargé Law sends their support to the project saying “Congratulations to the Council for the Welfare of Children and World Vision on signing this Memorandum of Agreement.  The United States is proud to support Project ACE and its efforts to combat the worst forms of child labor, including the online sexual exploitation of children.”

Marcia Eugenio, director of the Office of Child Labor, Forced Labor, and Human Trafficking (OCFT) at the Bureau of International Labor Affairs (ILAB) in the U.S. Department of Labor confirmed the Department’s support and stated that, “The U.S. Department of Labor is pleased to support Project ACE as it pursues a collaborative approach with key partners in the Philippines to counter the worst forms of child labor, including the online sexual exploitation of children, and promote acceptable conditions of work.

World Vision is a global Christian relief, development, and advocacy organization dedicated to working with children, families, and communities to overcome poverty and injustice. World Vision serves all people, regardless of religion, race, ethnicity, or gender.

World Vision has been working on child protection programs with USDOL since 2003. It has assisted more than 100,000 children by implementing the following projects: “ABK” Initiative or the Pag Aaral ng Bata para sa Kinabukasan (Children’s education for the future); followed by “ABK2” called Take Every Action for Children (TEACh) Now; and the “ABK3” called LEAP or Livelihoods, Education, Advocacy and Protection to Combat Exploitative Child Labor in Sugarcane areas in the Philippines.

The stars of the international hit romance comedy movie 'Crazy Little Thing Called Love (First Love)' Mario Maurer and Baifern Pimchanok are reuniting after 12 years in Netflix's 'AI Love You.'
Paramount Pictures has just announced that its US No.1 box-office hit Scream will hold special sneak previews in selected cinemas nationwide on Tuesday, February 1st. Horror fans are advised to check with their favorite theaters for the screening hours and ticket prices.
During the #SparkleMediacon, we asked Kapuso actor and filmmaker #KhalilRamos (@khalilramos) what or who keeps him motivated or sparkle as an artist:
Zaijian Jaranilla falls victim to the gradual breakdown of his parents’ tumultuous relationship in ABS-CBN’s upcoming drama series “The Broken Marriage Vow,” which premieres on January 22 on iWantTFC and January 24 on Kapamilya Channel, TV5, A2Z, Kapamilya Online Live, and TFC.
Emma Watson for British Vogue.
JUST IN: 'EMILY IN PARIS' has been renewed for two more seasons!