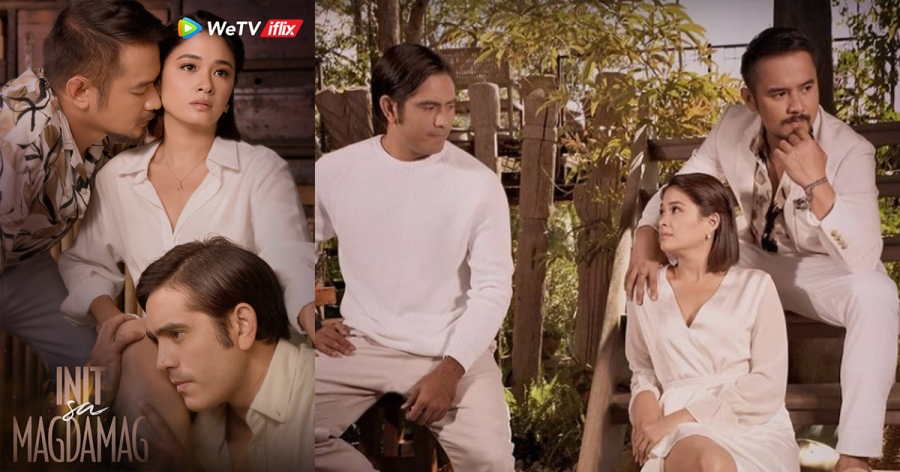 MANILA (April 14, 2021) – There is nothing everyone loves more than a show that brings on all the drama and the intrigue that surrounds a complicated love triangle. That is exactly what the newest sexy ABS CBN “Primetime Bida” series Init Sa Magdamag delivers in spades. WeTV and iflix VIP subscribers will get to stream the show when it premieres on Saturday, April 17, almost two days ahead of TV.

Leading the cast of this steamy new drama are three of today’s most talented actors – Gerald Anderson, Yam Concepcion, and JM de Guzman – as they tell a story of love, ambition and betrayal.

Concepcion and De Guzman play the prominent political couple Rita and Peterson at the center of Init Sa Magdamag, whose marriage is on the brink of collapse. Due to an accident in his younger years, Peterson is incapable of fathering a child, further adding to their marital woes.

Rita is convinced she can save their relationship if she bears a child through in vitro fertilization. Despite objections from their family, the couple decide to push through with their plans.

Things get complicated when Peterson proposes a different plan—get the barrio doctor, Tupe, played by Gerald Anderson, to be their sperm donor. What he doesn’t know is that Rita and Tupe were once in a relationship. The question now is how long can Rita keep her past with Tupe a secret from Peterson? “Init Sa Magdamag” is directed by Ian Lorenos and Raymond Ocampo.

When the trailer was released by ABS CBN Star Creatives on Youtube, views hit over 12 million views in just a few days after it was first released and quickly became a hot trending topic on social media.

Watch the trailer of Init Sa Magdamag on WeTV.

WeTV and iflix VIP subscribers will be among the first to watch ABS CBN’s newest “Primetime Bida” series Init Sa Magdamag when it starts streaming on Saturday, April 17, at 11:20PM – two days before it airs on TV. For users on FREE, you can catch up on all the episodes two to three hours after they air on the Kapamilya Channel and A2Z.

You can also catch the other ABS CBN “Primetime Bida” shows ahead of everyone on the WeTV and iflix VIP tier. New episodes of FPJ’s Ang Probinsyano are available to stream 50 hours ahead of other platforms and of TV, while the inspirational drama Huwag Kang Mangamba can be watched 46 hours before airing on TV. Catch up episodes of both shows will be up on WeTV and iflix two to three hours after telecast.

Check out photos from the red carpet premiere of #CallMePapi starring #EnzoPineda (@its_enzopineda), #AlbieCasiño (@thestallion09), #LharbyPolicarpio (@iamlarbs), #RoyceCabrera (@royce.cabrera) and #AaronConcepcion (@aaron_concepcion08), directed by #AlvinYapan.
There's a lot to process in Triangle of Sadness with its social commentaries and three-part story. But the film manages to be one of director Ruben Ostlund's most entertaining works powered by our very own Dolly de Leon.
Stars across Asia walked the red carpet of this year's Asian TV Awards which is held in Aliw Theater, Pasay City, Philippines. @asiantvawards
[SWIPE LEFT] "𝙏𝙝𝙚 𝙧𝙞𝙜𝙝𝙩 𝙩𝙤 𝙖𝙨𝙨𝙞𝙨𝙩𝙚𝙙 𝙙𝙮𝙞𝙣𝙜."
More than the romance, An Inconvenient Love is a coming-of-age story. And it works because of how good Donny and Belle has become as actors. I had a good cry watching and I look forward to more DonBelle in the future.
Newly signed Guitar apparel ambassador #MyrtleSarrosa (@myrtlegail) talks about possible gaming with #AldenRichards.