They risked their lives for the wrong reason.

Watch the trailer for the South Korean Youth Drama series ‘Extracurricular’ and catch it when it drops April 29 on Netflix.

Netflix debuted the main trailer of Extracurricular that provides a stunning glimpse into the show in which four high school students risk their lives for dangerous choices. The trailer shows in vivid detail how the students make choices that send them down the wrong path and are ultimately forced to pay the price for crimes they committed without an ounce of guilt. Jisoo (Kim Dong-hee) is a quiet model student who carries a secret inside that no one is aware of. He dreams of living a simple life, but to attain this dream, he leads a shocking double life and becomes involved in organized crime. Gyuri (Park Ju-hyun) is the ‘it-girl’ at school with everything, money and brains included. But while it seems she has the perfect life, she feels suffocated by the overbearing expectations of her successful parents at home. To escape from her parents’ pressure, Gyuri becomes an accomplice to Jisoo and assists him with his operations without any consideration of whether he consents or not. At this point, the story takes a turn for the worse as Jisoo and Gyuri’s business activities spiral out of control, and they are led down a road they cannot go back. To make matters worse, the school’s number one bad girl Minhee (Jung Da-bin) and her boyfriend Kitae (Nam Yoon Su), the undefeated school bully, become entangled in Jisoo and Gyuri’s mess, and all of their lives are thrown headlong into a whirlpool from which none of them can escape. 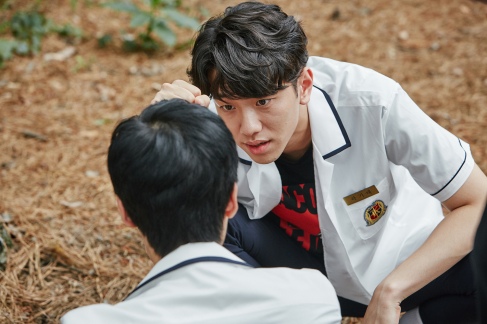 Extracurricular is a Netflix original series that follows a group of high school students who choose a life of crime and face the dangerous consequences that result from their choices. The show is an offbeat and intense drama by veteran director Kim Jin-min (Lawless Lawyer, The Time Between Dog and Wolf, and Marriage Contract) and new aspiring writer Jin Han-sae.

A shocking tale of teens who make questionable decisions at the crossroads of life, and the precarious implications this could hold for their future, Extracurricular premieres worldwide on April 29th.