SINGAPORE, 21 February 2020 – HOOQ, Southeast Asia’s leading video-on-demand platform for emerging markets, greenlights six new pilots from the top screenplays from the company’s annual HOOQ Filmmakers Guild, now in its third season. The pilot episodes will stream on HOOQ’s platform in late April 2020 and the best performing title will be produced into a full HOOQ Original Series.

Following a regional search which received more than 1,000 entries from aspiring filmmakers, HOOQ enlisted a star-studded panel of judges to shortlist the best pilots. Due to the unprecedented number of applications, six pilots were shortlisted instead of the usual five. HOOQ also increased the investment for the development of each pilot episode to USD $40,000 from USD $30,000 in an effort to further support Southeast Asia and India’s emerging talent, and elevate the quality of content produced.

Jennifer Batty, Chief Content Officer of HOOQ, said, “This year’s search proved to be difficult and gratifying at the same time. The quality of entries we received showed that there is a wealth of untapped stories and visionary filmmakers in the region waiting to be recognised. We’re proud and excited to be the platform where these budding talents share their voices and compelling stories with our viewers.”

Launched in June 2017, the HOOQ Filmmakers Guild is an annual initiative to seek out new film talent in Asia and provide them the opportunity to bring great ideas to life on screen. Each of the shortlisted six screenplays received USD$40,000 to produce a pilot episode. The pilot episode with the highest number of views on HOOQ at the end of the period, combined with scoring from a judging panel of top-caliber filmmakers and actors from around Asia, will be commissioned into a full series produced and aired as a HOOQ Original on the platform.

The pilots were selected based on relevance and potential appeal to Asian audiences, demonstrable creativity in storytelling and a well-told Asian story with an original point of view. Judging was conducted by four esteemed filmmakers from Asia, including award-winning Indonesian screenwriter and director Mouly Surya, Indonesian actress Adinia Wirasti with multiple ‘Best Actress’ wins to her name, one of Philippines’ most sought-after movie and TV director Antoinette Jadaone; and famous Thai singer and actor Teerapat Sajakul. In addition to professional judging, viewership figures will also be taken into consideration and factored in before the winner is selected. 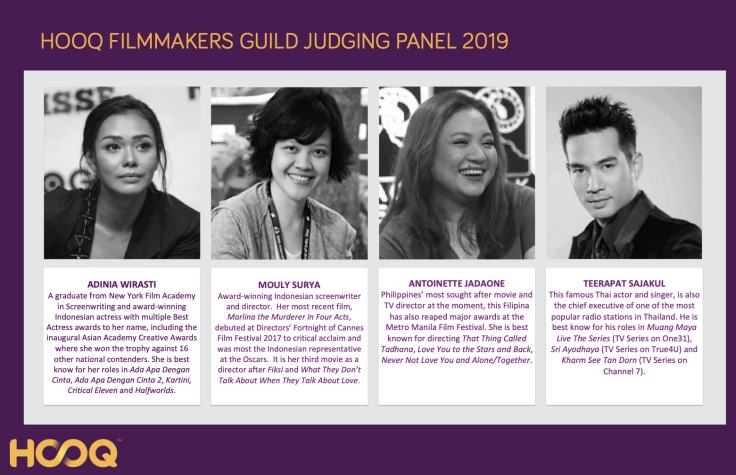 The previous HOOQ Filmmakers Guild pilots and winners have gone on to win various awards including the Grand Prize for Best Television Pilot at the 22nd Annual Rhode Island International Film Festival for BHAK (India).The HOOQ Filmmakers Guild Season 2 winner She’s a Terrorist and I Love Her (Singapore) won Best Original Programme By A Streamer/OTT at the Regional Asian Academy Creative Awards 2019 and has become the most viewed series on HOOQ Singapore since its launch. Meanwhile, Aliansi (Indonesia) won Best Comedy Programme and Best Actress in a Leading Role went to Oon Shu An for her performance in How To Be A Good Girl (Singapore) at the Asian Academy Creative Awards 2018.