He has done several TV shows and specials but what made the audience got their attention to the 27 year old actor was his portrayal of Joaquin, the antagonist in the hit primetime series Ang Probinsyano.

Here are the Top 10 Most Hated Scenes of Arjo Atayde as Joaquin in FPJ’s Ang Probinsyano:

There is no doubt on his effectivity as an actor, getting a top 10 list of scenes that makes the audiences hate him. His death in Ang Probinsyano actually got one of the highest ratings the action drama series had. Arjo can show rage but at the same time, the guy can still charm. That’s why it’s not surprising that his follow up project is a heavy drama series but also has a love angle for his character.

Speaking of his follow up series, Arjo plays the role of Paco in Hanggang Saan which he co-stars with his mother Sylvia Sanchez. I may not have met the guy in person, yet, but I’ve heard good things about his behavior as an actor and a son. It just clearly shows that Ms. Sylvia has raised him well not just to be a good son but also a good professional.

There’s more to see in Arjo Atayde’s character in Hanggang Saan which airs in Kapamilya Gold. But wishful thinking, Arjo Atayde deserves to be part of a film soon. His hardwork already paid off, being noticed by Filipino audiences around the world, and more projects isn’t a surprise anymore. The guy can act, sing and dance, and he definitely has the charm and talents to engage more viewers whether it may be in TV or in the big screen.

Here are photos of Arjo Atayde: 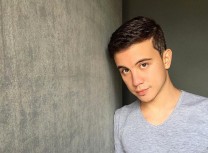 You can catch Arjo Atayde in Hanggang Saan on ABS-CBN’s Kapamilya Gold.