A few years ago, heartthrob actor-singer Xian Lim performed with the ABSCBN Orchestra in front selected students who packed the Aliw Theater just to get a glimpse of him. Somehow his boy-next-door appeal alone made everyone in the venue cheer at the top of their lungs. But a serious look at how he performed on the piano should make a strong case that he was there playing alongside an esteemed orchestra (conducted by Gerard Salonga) for one main reason: Xian can really play. And boy he did it beyond expectations!His image of him serenading a delirious crowd while on a grand piano comes to mind as he is set to do a major concert at The Theater At Solaire come July 15, Saturday. The title, Songs In The Key of X, strongly implies his musical sense and skills, particularly with singing and playing instruments. Evening of that day beginning 8 pm, Xian will showcase his talent through songs that best capture his timbre and soul. Produced by KimXian Around The Globe Inc.  (KATG) and line produced by Cornerstone Concerts, it is one extravaganza highlighting the music side of a famous face whose fan base here and especially abroad, is phenomenal. 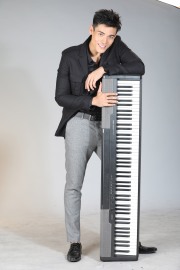 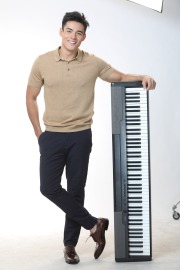 It is high time that his amazing musical gift, somehow overshadowed by his mainstream movie career, be put on display for his fans and curious spectators to celebrate with. Joining him on stage are Jona, Matteo Guidicelli and soul supreme KZ Tandingan as very special guests. Knowing that he is more identified with film than music, Xian himself has raised the bar, polishing more his technical know-how of music and immersing his time to rehearsing. This one serious guy is ready to take the stage in a bang, one that sounds loud yet sweet, melodic and passionate. A totally different Xian will be showcased that night now that he is even more mature with his craft. Truly a celebration with his followers all over the world. Xian is American-born who grew up very much Filipino in sentiment and style. A Star Magic talent, he bagged instant fame when he played the role of Andy in the series My Binondo Girl.

Clearly a man of many hats, Xian, a psychology student back in California, first gained fan attraction as a model before eventually showing his charisma as a film actor. When he returned to Manila, he became a basketball scholar for the University of the East. As a child, he already expressed interest in music and quickly he learned to play instruments including piano, trombone, saxophone and guitar. He once joined a symphonic band. He is also a health-buff; his athleticism extends to running. Xian released his debut album So It’s You in 2012. It became platinum. His follow up XL2 came two years later containing Bakit Hindi Ka Crush Ng Crush Mo and his version of Si Aida o Si Lorna o Si Fe. He sang the theme to My Binondo Girl Ako’y Sayo Lamang.Last year he staged his first concert A Date with Xian to good acclaim. This year he is expected not just to win dates, but to get the nods of even the toughest-to-please music critics. For Xian, more than proving to everyone his legitimacy as a musician, he wants everyone to just enjoy the music to be shared on concert night. Music fans may have seen him in concert tours with other Star Magic acts. But on July 15, it will definitely be him, his act. Don’t be surprised if after the show, he becomes known as the heartthrob who really can sing and play.

Supported by media partners MOR 101.9 For Life, MYX, abscbn.com and the Manila Concerts.For tickets, call 891-9999, log on to www.ticketworld.com.ph or visit @ticketworldinc on Instagram.

Here are some photos from the Songs in the Key of X Press Conference: